The millenary Buddhist teachings have arrived in the Obrajes prison for women (La Paz, Bolivia). A group of volunteers from the Sakya RInchen Ling Center has started to regularly visit the facilities of this convent-turned-penitentiary in order to introduce the inmates to the practice of meditation. What follows are the words of LIliana Arias, the coordinator of the team and chronicler of an adventure in an environment as unknown as fertile for change.

The penitentiary received us on 20 September 2017. Upon arrival, both the approved materials for the formation and each of us were examined. Then we got in.

We suddenly were in a sun-filled courtyard bathed by the sun, surrounded by women deprived of their freedom. Some of them talked in groups to pass time, while others sunbathed. Most of them were busy taking training courses in different fields, especially in craft work.

The number of applications had been huge. The participants were called in progressively, and we started the course with 11 inmates in the old police women’s dining hall. All of them were brave women looking for a change in their lives. Women who had tried everything out there and were not satisfied. Some, crushed by an overwhelming weight, were looking for a path that could lead them to a truly transformative experience.

We started the meditation. The benefits were explained first, as well as the positive effects it has on the body, speech and mind. During the instructions, those with the most active minds wanted to witness what was going on around them, while others were overpowered by lethargy. Others found it very hard to get comfortable in the ideal posture. And still, some of them managed to successfully follow the pace of the meditation. To conclude, we explained them that the key to meditation is daily practice: improvements and results are only experienced with a practice sustained over time.

The second introductory course, a week later, was taken by 17 inmates. We guided again meditation exercises, and although some of them were already familiar with process, we explained them once more for the newcomers. The participants showed a growing interest, and we experienced their warmth and kindness.

Mrs. Sonia deserves a special mention. From the very first time we arrived at the prison, she welcomed us with a large and friendly smile. Mrs. Sonia is a senior inmate, and she’s in charge of the rest of her peers. Though at first we had been assigned the prison’s chapel for the course, last-minute changes caused us to be moved to the police women’s dining hall, located in an old ramshackle house. Due to her experience, collaboration and kindness, we were able to adapt and set up the new space with tables and chairs she smilingly facilitated us with. 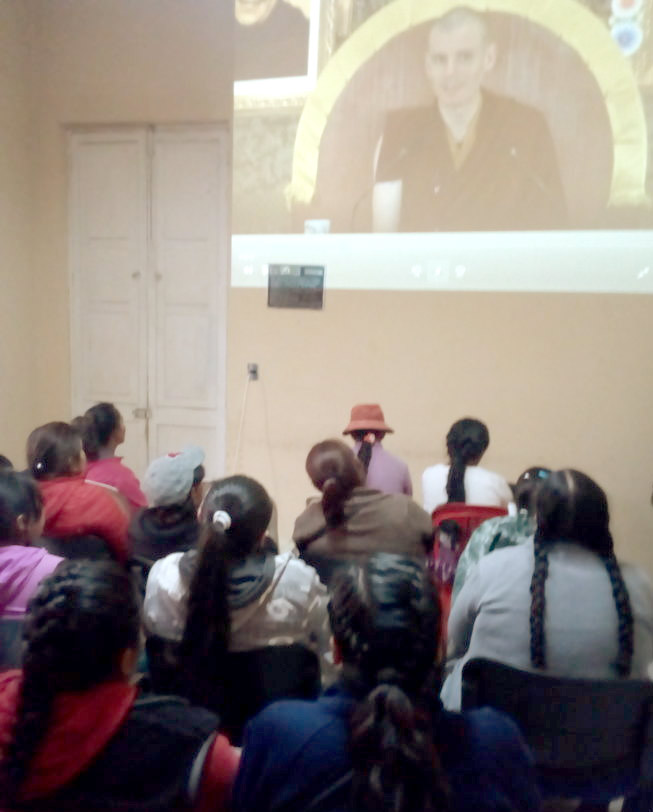 The teachings about ‘The Sage’s Intent’ began on 4 October with 18 participants. All of them listened to Lama Rinchen’s teachings with both concentration and curiosity. Although many terms and explanations were completely new, we helped them presenting their meaning with everyday examples.At the end, the participants were happily looking forward to the second session.

The second session was held on 11 October, Women’s Day in Bolivia. This time we were offered the chapel to celebrate de course. Because eating was not allowed there, we had to use the old dining hall: we were to throw a small party in which we would offer tarts and drinks to the students at the end of the session.

The content of the session was very deep, yet the 24 students ended up feeling very motivated. They saw they were able of making a real change in their lives, and that any person with genuine interest and motivation can take advantage of these teachings.

A small party was celebrated after the meditation honoring the day: they all received roses, tarts and drinks. The volunteers and I realised how much happiness brings the beauty of a flower, drawing brilliant smiles and radiants faces. At the end, all the inmates waved us goodbye, full of gratefulness and joy.

We met the sister in charge of the chapel when we were leaving. We then had the opportunity to explain to her the project, and she was very satisfied. To our surprise, she told us that meditation was also practiced in her tradition, and that she would be very happy if the inmates were to practice it too. From that point onwards, the chapel was at our disposal to host the course.

This experience is leaving many beautiful marks and traces. Little by little, it is making people feel closer to each other. Many are internalizing the knowledge, and the progress they are making can be perceived. We will be glad and happy to continue with this great and beneficial adventure.

May all being acquire new knowledge.

May they embark the ship of Liberation

May they all reach Enlightenment.

This job would not be possible without the dedication, enthusiasm and work of Rosselyn Tamayo, Jhory Montaño, Mónica Ríos and Liliana Arias, the volunteers implementing the Formation in Meditation in the Obrajes prison.

The Sakya Foundation has promulgated the development of this one-year online course in order to train meditation teachers. This formation is backed by a certificate awarded by the Sakya Foundation in Spain to those who complete 80% of the covered materials.